It is fair to say that there are only two institutions older than the Winthorpe Cricket Club - the Church and the Lord Nelson public house.

The Club was formed at a meeting held on the 8th June, 1887, and with two breaks during the First and Second World Wars, has been playing on the cricket ground in Holme Lane ever since. Oddly enough, the ground is not in Winthorpe at all, but in Holme Parish.

The original minute book is still preserved and, in fact, was in constant use from 1887 until 1968, when the pages ran out and a new one had to be purchased.

Another historic record held by the Club and hung on the wall of the Pavilion is a photograph of the original 1887 side. It is interesting to note that the mode of dress was left to the individual, from white flannels and cricket caps to dark trousers, braces and bowler hats. The photograph illustrates the true foundation of village cricket in those days - the combination of gentry and artisan.

The minute book contains a wealth of fascinating information. Year after year the same names are recorded, together with a succession of sons. How many Clubs can claim only six Presidents in eighty-four years? J.G. Branston served for 38 years, Miss Gilstrap for 12 years, and our current President, Alderman G.R. Walker, is now in his 10th year of office. Even more fascinating is the fact that between 1887 and 1939 there were only two Captains. J.R. Dench served from 1887 to 1907 and R.H. Bradley from 1908 to 1939. The latter has rightly been called the father of Winthorpe Cricket, and continued his loyalties to the Club until he died in 1954. Other names come to light; Herbert Speight who, after serving the Club in various capacities over a period of fifty years, retired due to ill-health and was made the first life member. Percy Salter and Charles Horner, who served the Club for a great number of years. Walter Burch, who came into the Club when it was re-formed in 1922, and after his playing days were over continued to umpire, and is generally considered to be one of the ablest in the area. Walter Burch, now in his 49th year of service to the Club, has become our second life member - a tribute to all he has put into the Club as player, administrator and umpire.

What changes have taken place on the ground? The playing area and cricket square are certainly much larger than in 1887. Our picturesque ground is no longer grazed and the sheep droppings picked up on a Saturday morning prior to a match, but is a ground which any village or town could be proud of. The same thread runs through the whole history of the Club, the work and love that generations of members have put into the ground and wicket to make it what it is today. A ground to which some of the more famous of the Nottinghamshire and Lincolnshire Clubs are pleased to send XI's to play the Club.

Not so long ago, a new Club visited Winthorpe and was heard to remark prior to the game "Well, they've got it all - good ground, good wicket, good pavilion, score box and sight-screen, but can they play cricket?" We proved we had cricket as well.

Successive generations have improved facilities in the way of dressing room and pavilion accommodation, and since the new Pavilion was opened in 1965, it has no longer been necessary to visit the Village Hall room for tea. We now have a bar in which, after the game is over, past and present events can be mulled over, and even expanded with the passage of time.

Many things of comparison art worthy of note; in 1913 the Committee was concerned with the vandalism to the Pavilion. In 1971 the Committee still face the same problem. 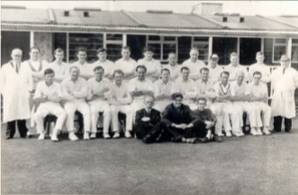 Dinners and Dinners & Dances have been a tradition of the Club, one that exists to today. A minute of 1911 is most amusing. It reads, "Reference was made to a highly successful dinner held on the 2nd February at which 60 attended. The Secretary was thanked for his work in connection with it. Social intercourse followed and the meeting closed with a vote of thanks to the Chairman for presiding." A Secretary in 1971 might have worded this rather differently.

Money and values change with the transition of the Club from a village side to one of much wider repute. In 1910 the expenditure of the Club was £25, in 1970 it was almost £500.

We cannot say that Winthorpe has produced cricketers of County or International standard, but over the years there have been many of great local reputation. Pre-wars, R.H. Bradley, "Gaffer" Speight, Sunman, Squires and others. In post-war years, perhaps not so many, but Ray Burch has scored over 1,000 runs in a season on three occasions, and who knows what talents the youngsters of today might throw up.

In 1971, England regained the Ashes. There is an interesting distant connection between this and the Winthorpe Cricket Club. As is known, the Ashes are mythical and refer to the obituary notice, which appeared in the Sporting Times following the defeat of England by Australia in 1882:

Which died at The Oval

Deeply lamented by a large circle of

N.B.   The body will be cremated and the Ashes taken to Australia.

It so happens that the Club has a young playing member who is a descendant of C.T. Studd, who together with W.G. Grace was a member of the England side defeated in 1882.

The Cricket Club has made known the name of Winthorpe over many distant acres in its own County, in Lincolnshire, Derbyshire and Leicestershire, and in 1971 it will be visiting Norfolk and Yorkshire. For the sake of tradition and of cricket, one hope that which started in 1887 will be in strength and good spirits when it reaches its centenary.