Winthorpe and the Trent

Winthorpe stands on a long low ridge of sandy loam with a gravel subsoil, part of the river terrace which is broken by the outcrop of Beacon Hill, with its Keuper marls and gypsum deposits. There are a few streaks of clay running through some of the village properties, but as most gardeners know, the soil is mainly very light and gravelly.

The very earliest history of the village is inevitably connected with the river Trent, which according to many eminent geologists, has changed its course from the ice ages onwards. It is believed that at that time the water was prevented from flowing into the Humber by a retreating sheet of ice, and was forced to pour over a low gap in the hills near Lincoln and so straight into the North Sea. This old course of the river can be traced by the presence of a bed of Trent gravel, which is composed of Derbyshire and Nottinghamshire rock materials unknown in Lincolnshire. This bed stretches from Farndon and Newark through Winthorpe and Langford in an S-shaped belt to within a mile or so of Lincoln and then beyond to the Wash. Later, when some of the water found its way into the Humber, the river meandered to and fro across the broad flat valley, probably taking the form of several streams of which sometimes one, sometimes another was the main stream when floods occurred.

Mr. Bernard Smith, F.G.S., in an article from "The Geographical Journal" for May 1910 suggests, as do many geologists and historians, that the Trent may have followed the line of the Fleet stream here and there. "Between Langford and Girton there is a low westerly-facing cliff of gravel and sand, beneath which the Fleet stream flows from Winthorpe to join the Trent near Girton. The relations between the cliff and alluvial plain make it clear that the Trent has worked along different parts of it at one time and another; there are in fact expansions of the Fleet at Langford, Besthorpe and Girton, and formerly at Collingham, which must be regarded as relics of old Trent."

The Rev. E.G. Wake in his "History of Collingham and its Neighbourhood" adds that the Hundred of Newark was separated from that of Thurgarton not by the Trent, which one would regard as the natural boundary, but by the Fleet. If, therefore, the Fleet was the old Trent, Spalford, Girton, Besthorpe, Collingham, Langford and Winthorpe form a line of villages on a bank, which rises directly from the Fleet and from the old Trent channel further north. The proximity of these villages to a navigable river would agree with the rule of colonisation frequently adopted by the Saxons.

Two small streams run through and round the village to join beyond Rectory Farm and become the Fleet. One stream rose in the Coddington area and flowed along field ditches through what is the old airfield. This was piped in when the airfield was made and the stream only makes its appearance near the southbound slip road to the by-pass. From there it flows across the Park, along the foot of the Spinney gardens, past the Lord Nelson Inn, through culverts under the village Green and the Gainsborough Road, and so on out beside Holme Lane and Rectory Farm.

The other stream rises in a series of springs and swampy areas on the outskirts of Newark near the old gravel pit behind Ransome & Maries' works. Again, it has for a long time followed the line of field ditches, runs under the Fosse Way and alongside the A1 by-pass, was diverted under the by-pass near the old Gainsborough Road approach to Winthorpe, and then flows along the foot of the Winthorpe Hall ridge, and so joins the other stream beyond Rectory Farm. (See map) The Internal Drainage Board is of the opinion that it is very difficult now to work out which is the Fleet and where it really rises, particularly as the word "Fleet" could be applied loosely to any stream. Even in old maps the stream in question peters out in swampy areas. In early churchwardens' accounts and receipts neither of the two streams is described as the Fleet, only "the beck," with or without the capital.

"1857  April 14. Resolved that the items in the Surveyors' Accounts relating to the covering-in of The Beck at Winthorpe be disallowed."

In historical times the course of the Trent has been much affected by floods. According to Dickinson (who is not always very reliable), the village of Holme was attached to the parish of North Muskham until the year 1600 when the Trent separated the two villages during a severe flood. But Saxton's map, published about 1576, shows Holme already cut off, and the Will of Stephen Surflett, of the same date, leaves land for the maintenance of the water-bank at Holme, so the change may have taken place in his life-time.

Between Midsummer and Christmas 1346, long continued rains resulted in one of the most disastrous of early-recorded floods. Then in 1683 the bridges at Nottingham and Newark were destroyed by ice and water following a quick thaw after a long frost accompanied by 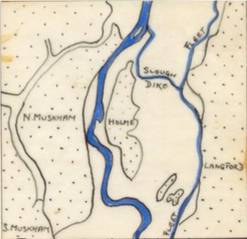 heavy snow. Muskham and Holme suffered severely at this time. Floods are also recorded in the early eighteenth century and also in 1770, 1774 and 1790. Another heavy flood at Candlemas 1795 which, like that of 1683, was the result of a quick thaw after a long frost, flooded Girton village to a depth of three feet, and rose to four feet six inches on North Collingham churchyard wall. Further floods occurred in 1852, 1867 and 1875 and again in the twentieth century, but the gradual building of new flood banks along the length of the Trent, particularly from Nottingham downstream, has greatly reduced the risk of flooding.

Dickinson also mentions the discovery of a Roman bridge near Winthorpe, but according to Peter Lord and others, this appears to have been in the parish of South Collingham. The drought of 1792-3 apparently revealed the foundation of an immense bridge of stone and masonry. These remains disappeared underwater till 1884, when workmen were set on to improve the navigation of the Trent. They found two of the piers of this ancient bridge resting on diamond-shaped bases more than thirty feet long and ten feet wide, with a clear waterway of twenty feet between them. Unfortunately, these piers had to be destroyed to make room for nineteenth 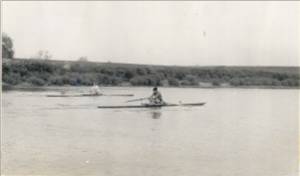 The Rev. E.G. Wake, recording from Dugdale's Monasticon, the gift of Winthorpe Church by Walter de Amundeville to the Hospital of Elsham, Lincs., adds that included in the gift were four mills on the Trent, three of them outside "the town of Winthorpe," and the other within it. Amundeville, added that "Thurstan the carpenter" (of one of the mills) "and his heirs should hold it of the said Hospital for 12d. per annum." Another tenant at Winthorpe was called Ralph Small. This transfer of property seems to have been made in the early twelfth century, and a few years later William de Amundeville allowed the monks of Rufford to construct a fishery in the Trent, between Winthorpe and Muskham, "with all the liberty he should use himself if he would have made one." His heirs were informed that this privilege had been accorded as atone­ment for a sin committed against the said monks.

It is ironic to read in the Plans and Particulars of the sale of Winthorpe Hall in 1867 that, "the preserving of Salmon in the River will give fine Fishing, as it is the favourite resort of this fish." The Trent now has the unenviable reputation of being the most polluted river in Europe after the Rhone, but fishing is still possible and popular along the stretches near Newark and Winthorpe. In fact, Peter Lord in his "Portrait of a River" points out that "Today, Winthorpe is the site of the first ‘inland water fishery' to be established by the Trent River Authority. Formed, like almost all the other lakes of the Trent Valley, by gravel extraction, it covers fifteen acres, and the fishing rights acquired by the River Authority include the adjacent length of the riverbank. It is part of a long-term plan to ensure that there is angling for all on a day-ticket basis. Winthorpe Water is at present one of the few places along the Trent where anyone can fish without belonging to an angling society but a condition of the day-tickets is that the catch must be returned to the water."

In addition to the coach-loads of fishermen who come through the village to Winthorpe Lake, there have been during the last few years many rowing enthusiasts who come to compete in the Newark Rowing Club's annual regatta, which is now held along Winthorpe Rack, a long straight reach of the Trent under the new bridge constructed to carry the A1 by­pass. Crankley Point beyond this bridge, where two arms of the Trent join, is of considerable interest to Winthorpe because of its importance in the Civil Wars, and it will be mentioned more fully in another section of the Scrap-Book.