The Lords of Winthorpe Hall

THE LORDS OF WINTHORPE HALL.

The following second and concluding article about the interesting subject from the pen of the Rev. C. W.   H.  Griffith is published in “Winthorpe Parish Magazine”. The previous article on the same subject appeared in the “Herald” on August 10th 1907.

Before proceeding one correction must be made. In stating that Dr. Taylor was called to Belvoir Castle to attend King George, local tradition constantly repeated to the writer was followed. However, the Newark histories assert that the King was not the patient, but the Earl of Burlington, whose grateful wife caused Dr. Taylor to go to London, made much of him, and secured his advancement, and was the means of his obtaining the distinction of Physician in Ordinary to the King. Why tradition and histories do not agree is difficult to understand. But histories were not to hand till after the tradition was quoted. Truth may be between the two.

So the Winthorpe Hall Estate passed to Roger Pocklington. It remained for him to complete the Mansion and outbuildings and lay the grounds. How much of the Man­sion had been built by Dr. Taylor, and whether the new owner built according to the original plans is uncertain. Probably they were modified into more reasonable expense. On examination, it might be concluded that the superstructure is not in accord with the massiveness of their basement, and architecture of the upper portion, may be called characteristically Pocklingtonian as evidenced in other of the new owner’s buildings.

Under Roger Pocklington things prospered for many years and Winthorpe Hall saw some of its best days. His name was one long to con­jure within the Parish. His wife, Mary, was the eldest daughter of W. Roe, Esquire, of Sudbroke, in the County of Lincoln. In 1775, the first child was born in Winthorpe Hall, a boy, named Roger after his father. Next year a daughter Elizabeth was born. These were the only children. Two incidents of their happy childhood as children of the Hall and of their father’s joy in them remain cut in stone. In the year 1779 the Church tower fell. Against the south wall of the churchyard stands a stone thus inscribed “This steeple was rebuilt in the year 1779. The first stone was laid on the 15th day of April by Roger Pocklington, junior, of this parish, aged 3 years 8 months and 4 days.” Good little workman. It stood till it was pulled down 108 years after. Next on an oval tablet over the door of the Farm House now occupied by Mr. Tustin, we read “The first stone of this house was laid by Roger Pocklington, junior, and his sister Elizabeth, June 25th, 1787, aged 11 years, aged 10 years."

In 1778 common lands in the Bundles, and in the Carrs and Pastures of Winthorpe across the Lincoln road were enclosed under the award of the Commissioners, and simul­taneously many exchanges were affected be­tween owners to concentrate their properties with the sanction of the award. The award is a most interesting document. By this means Pocklington much improved the Hall Estate, but was very generous in his exchanges. Here only one or two instances shall be mentioned. The Old Rectory, des­cribed  in 1764 as “built of stone, mud and plaster, with thatch, with 4 low rooms and 4 chambers,” the height of the walls being about 12 feet stood with garden, orchard, barn and marsh in the rear, north of the Hall grounds at the upper end of the present coach drive. A public road led to it from the Newark road, from the angle just below the present Hall Room in the corner of which was situated Brewer’s Charity, “White House” and garden. Naturally Pocklington wished to possess both the Rectory and Brewer’s Charity House, so that the front of his property should reach to the Newark road on one side and the Holme road on the other. For the old Rec­tory he therefore gave the Farm House, “sashed and tiled,” and farm buildings and premises. Now occupied by Mr. Batty, over the door of which is now the misleading title since cut in “The Old Rectory.” It was in exchange for the Rectory, but the Rectory it never was, because at the same date lands were awarded to the Rector in lieu of nearly all tithes, “which lands to be of value had to have a farm house, and the Rectory, or without an income. To Brewer’s White House, Pocklington gave the central house of the present almshouse and others have since being added thereto part of the garden of the original. Within living memory of the persons still living the “White House “still stood and was the Post Office and a general shop, kept by an old tailor named Johnny Cawthan, who died in January 1872.

One other change may be mentioned. As parish property in the hands of four trustees, the inhabitants of Winthorpe possesses an acre in the Rundles on the Trent bank, and 2½ acres in the Carrs, as well as the “Old Yard,” which last contained about half an acre, and was the site of the present house and garden, now occupied by Miss Gilstrap’s head gardener. These were made over to Pocklington in 1778, who gave in exchange the present Allotment Field nearly 4½ acres at the east end Haydon Lane. The Parish therefore gained an acre of land, but Pocklington obtained a central site in the “town” for a house.

In 1672 the patronage of the Rectory of Winthorpe, which had since the dissolution of the Monasteries belonged to the Crown, was by Charles 11, given to the Mayor and Corporation of Newark as a small and only acknowledgment of that town’s loyalty to his father. It was sold by the Corporation to Pocklington, who then became patron.

In course of time the son Roger grew up. It must have been in view of his approaching marriage that his father built the Grove, a smaller edition of the Pocklingtonian architecture of the Hall. In the Grove lived Roger and his wife Jane, and there in 1802 was born their eldest son Roger, making three generations of Rogers. Next year followed Joseph, next year Mary Elizabeth, and next year Jane Augusta. Happy days for the Hall and the Grove.

But already dark shadows of money troubles were falling speedily to bring the Pocklington reign to a miserable end. Roger Pocklington senior, now 70 years old, was co-partner with William Dickinson and William Hunter Hun­ter, in a Bank at Newark, and they with Samuel Raynes in a Bank at Retford. Their London Bankers and correspondents were the firm of Williams, Drury, Moffat and Burgess of Birchin-lane Bankers. In 1803 the Newark and Retford Bank had become “indebted to very considerable sums of money and might become indebted in further sums” to the London Bank. Hence the London Bank demanded security to the amount of £120, 000. Consequently on May 3rd 1803, for part of his share of the, security, Roger Pocklington had to make over to Trustees all his estates, including all his Winthorpe property, to be sold on behalf of the London Bank should his own Newark Bank become bankrupt. So this time Winthorpe Hall became security for debt. For six years the Bank struggled on under its large weight of liability. In August 1808, Hunter retired from partnership, leaving only Pocklington and Dickinson. Till late in the spring of 1809 the Bank continued to issue his paper notes, specimens of which still remain. But in July 4th, 1809, the doors were closed, and August 10th bankruptcy was declared, and Pocklington stood absolutely ruined, an old man of 75 years. His wife Mary had died the year before and lay buried in Winthorpe Church, delivered from seeing the misery of her husband’s misfortunes. Her husband did not long survive for next year, October 12th 1810 he died in Newark, and was buried beside his wife in Winthorpe Church, near to Dr. Taylor and the first and second owners of Winthorpe Hall thus finding their last resting place together. The Hall and Estate was of course sold on behalf of the debt to the London Bank. Such was the pitiful end of the Pocklington era in Winthorpe. The property was bought by Lord Middleton. Roger Pocklington, the son, and his wife, Jane, seem to have gone to live at Leamington, for in 1847 dying there, aged 71; he was brought to Winthorpe to be buried besides his parents and thence to his wife four years later. Here they all lie, their bright earthly spending in grievous troubles all past and gone and Winthorpe has forgotten them, but it still owes so much to the Taylor and Pocklington eras.

This article was presented for the Winthorpe Village Scrapbooks by the family of the late Cynthia Morgan.

I am unable to find the first part of the article.

The stone tablet, "This steeple was rebuilt in the year 1779; the first stone was laid on the 15th April by Roger Pocklington Junior, of this parish, aged 3 years 8 months and 4 days" is now lying in the undergrowth on the east end of the churchyard. Due to the weather the inscription has now become obscured. 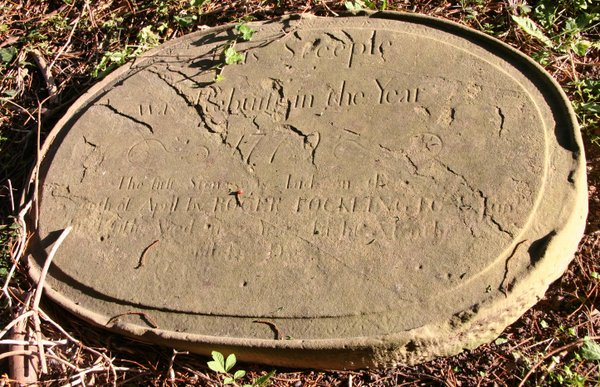 The stone tablet now lying in the church undergrowth.