Sunday 18th May - With Peter Seymour, our coach driver of Travel Wright, Newark, 32 residents and friends from Winthorpe set off on a bright sunny morning for a holiday to North Devon.

Devon is the largest county in South West England and the third largest county in England. It is unique among English counties, in that it has two separated coastlines, on the English Channel and the Bristol Channel branches of the Atlantic. Devon has many seaside resorts, historic towns and cities, plus a mild climate, which accounts for a large tourist sector for its economy.

A lunch stop was made in the city of Gloucester. The magnificent 900-year-old Norman Cathedral Church of St. Peter and the Holy Trinity is rated as one of the most beautiful in the world and starred in the films of J.K. Rowlings' Harry Potter books. Close by were the Docks which, until a few years ago a busy working place and has now been extensively developed and offer a mixture of museums, restaurants, shops and homes.

Our stay for five nights was at The Park Hotel in Barnstaple, the unrivalled capital of North Devon. The three-star hotel, with its 43 rooms, overlooked Rock Park and the River Taw.

Barnstaple, a pleasant town nestling in the valley of the River Taw, is one of the oldest towns in Britain and was the centre of the wool trade during the medieval period. It is now the administrative, commercial and agricultural centre of

North Devon. The town has many attractions from the many family businesses in a traffic free shopping centre to the large stores on the outskirts of the town. In the town, close to the Pannier Market built in 1855, is the Parish Church of St. Peter and St. Mary Magdalene. Built in 1318, it has undergone many changes. The most notable, which one can see, is the twisted broach spire caused by a lighting strike in 1810 which melted the weathercock and warped the timbers.

Monday 19th May - Setting off in glorious sunshine we travelled through Exmoor National Park to the northern edge of the county. Deep wooded valleys with deciduous trees, lush pasture divided into a patchwork of tiny fields, with sheep and dairy cattle, and threaded with narrow lanes whose banks supported a colourful array of 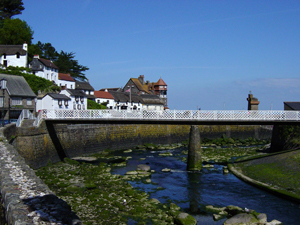 wild flowers and grasses. The hedgerows, which are mainly Beech, are about 4 feet thick and 6 to 10 feet in height, making them stock proof. Very little Hawthorne was seen. Amongst this spectacular scenery is the bright airy Victorian village of Lynton with quaint houses and shops. A unique water operated cliff railway dating back to 1890 joins the village of Lynton to its sister village of Lynmouth, 500 feet below. Lynmouth, nestling below the cliffs, has a pretty harbour with quaint fishing cottages tumbling down the street towards the quay. No wonder the Victorians called the area ‘The Little Switzerland of England.'

Lynmouth was the scene of a flood when in 1952 storm waters rushed down the East and West Lyn rivers sweeping aside bridges, riverside buildings and the harbour resulting in thirty-four people losing their lives. The Rhenish Tower, a folly building at the end of the pier, was one of the buildings that suffered from the flood and has now been fully restored.

Leaving Lynmouth we travelled along the coastal road, passing through Doone Valley where R.D. Blackmore set his novel ‘Lorna Doone,' going down the notorious Porlock Hill with its 1:4 gradient, to Minehead, one of Somerset's best holiday resorts on the edge of Exmoor National Park. This holiday resort, which has won many coveted Britain in Bloom awards, has a wide sandy beach and is home to Butlin's Holiday Camp. On the slopes of North Hill, viewed as a sentinel from far out to sea, and between quaint cottages is the Parish Church of St. Michael, a 14th century building seeped in history.

Our journey back to Barnstaple, before crossing the central part of Exmoor, took us to the medieval village of Dunster for a magical journey back in time. Dunster's fame and wealth was built on its cloth making where it was sold in the octagonal wooden Old Yarn Market, built in 1609. Overlooking the village high on a wooded hill stands Dunster Castle. There has been a castle here since Norman times. The present castle, remodelled in the 19th century, has now become a lavish and comfortable country home. Nearby on Church Street was a beautiful building, The Nunnery, clad with slate and now a private house

What a place to end the day.

Tuesday 20th May - On another bright and sunny morning we made our way southwards across the rolling countryside via Crediton to arrive at Buckfastleigh on the southern edge of Dartmoor National Park. Surrounded by woods and meadows this quiet town is best known for the nearby Buckfast Abbey, home to a Roman Catholic Community of Benedictine Monks. Dedicated to St. Mary, Buckfast Abbey was founded before the Norman Conquest in 1018 and abandoned to the Dissolution of the Monasteries by Henry V111 in 1539. The present building, started in 1907, was completed in 1937 by just six monks in a mixture of English and French styles.

Leaving Buckfast Abbey and travelling across stunning beautiful moorland where the famous Exmoor ponies were roaming we arrived at Postbridge, an oasis in the centre of Dartmoor National Park, with Beech trees instead of palms. Postbridge offers the finest example of 30 clapper bridges in the country. Built in the medieval period by tin workers for safe passage of foot, horse and packhorse traffic across the East Dart River, the bridge is constructed from four large granite slabs supported by three granite piers. The large slabs are over 4m long and 2m wide and weigh over eight tons each. The word clapper is believed to have come from an Old French word clapier meaning ‘heap of stones.'

The scenery had now notable changed from fields bounded by Beech hedges to dry-stone walls across bleak moorland. Tors could be seen on the hills, whilst the hillsides were littered with broken rocks. We were unable to see any Standing Stones as access was prohibited for coaches.

Our last stop of the day was at The Old Police Station, Princetown, now a café, for a Devonshire Cream Tea. Princetown, the highest village on Dartmoor, and home to Dartmoor Prison was built in 1809 on land owned by the Duchy of Cornwall, who is the Prince of Wales.

This made my day seeing the magnificent granite structure of the clapper bridge.

Wednesday 21st May - Another bright start to the day had us travelling North West to the seaside resort of Woolacombe. The three-mile long sandy and gently sloping beach is popular for surfers and has been ranked several times in the world's top ten beaches.

Following the coastline we stopped for lunch at Illfracombe, North Devon's leading holiday resort. Upon entering this stunning coastal town we were confronted by the cream coloured double-conical towers of the award winning Landmark Theatre, which opened in 1997. These towers looked similar to a power station cooling towers. This similarity gives the theatre the local nicknames of the ‘Power Station' or ‘Madonna's Bra.' The small harbour, full of a mixture of fishing and pleasure boats, is surrounded by cliffs, white washed houses and grand Victorian villas. Overlooking the pier and harbour and standing on a rocky crag, known as ‘Lantern Hill'

stands the Chapel of St. Nicholas, who is the patron Saint of Sailors. Built about 1320, the chapel would have served the mariners and their families in the small houses around the harbour. It was also used as a lighthouse via the oil filled lantern on top of the building. The use of the building as a lighthouse continues to this day and the green electric light

of the lantern is a familiar sight to sailors and residents alike. In the early 1800's John Davie and his wife took up residence in the chapel and brought up 14 children.

The poem written by Mrs L. Vickers tells a nice story about ‘The Chapel on the Hill.'

The little Chapel on the Hill

Looks so bleak and bare,

But oh! the tales that it could tell

Of history made there.

The ray of light that shines

From the tiny window gay,

Gives safety to each passing ship

And guides them on their way.

I hear a family's laughter

There's washing waving on a line

My Chapel gave so freely,

Oh! How many people knelt here?

To thank Our Lord most dearly.

For lives they thought had finished

When through the mist and rain,

A boat appears and thankfully

The men are home again.

His arms stretched out to calm,

The angry waves that break there

He keeps them from all harm.

O little Chapel on the Hill

I sit and listen and pray,

That God will always keep you safe

For many and many a day.

This Chapel is the jewel of the town.

Our final destination of the day was to travel on the newly reopened Lynton and Barnstaple 1ft. 11½ ins. narrow gauge railway. The one-mile journey from Woody Bay Station to Killington Station is the first phase in rebuilding of the old line, which first opened in 1898. Our three coaches pulled by ‘Statford,' a coal fired steam locomotive worked at a pressure of 160 lbs per square inch. ‘Statford,' a replica, was made in 2005 by the Hunslet Engineers Co. Ltd. of Leeds.

Thursday 22nd May - On an overcast morning we travelled west and then followed the coastal road south, passing the pleasant fishing village of Appledore to Clovelly, the ace of the North West. Set into a steep hillside, Clovelly, owned by the Hamlyn family, is one of the most famous villages in the world, since the novelist Charles Kingsley (1819-75) wrote in 1855 about the village in his stirring story of the Spanish Armarda, ‘Westward Ho.' The single cobbled high street winds its way half a mile down the hillside, through traditional whitewashed cottages festooned with colourful flowers, to the 14thcentury quay, 400 feet below. The street is too steep for motor vehicles, which are banned, so for centuries donkeys were the main form of transport. Now, as donkeys are no longer used, every thing is transported by hand pulled sledges. The cobbled street, known as ‘Up-along' or ‘Down-along' uses pebbles from the beach for its construction.

This is a timeless village.

The afternoon was spent at Hartland Abbey tucked away in a secluded valley. The abbey, founded in 1137 as an Augustinian monastery, was the last one in the country to be dissolved by Henry V111 who gave it to his Sergeant of the Wine Cellar at Hampton Court Palace, William Abbot. It is now owned by the Stucley family. Over the years the building has gone through many changes and what you now see today is a fine Georgian manor house.

Walking westwards for a mile from Hartland Abbey through a shaded wood full of foxgloves towards a sheltered valley and a stone's throw away from a remote Atlantic cove, was ‘Blackpool Mill,' a 15th century cottage. The cottage was used as a location for the film ‘The Sheltered Seekers,' and the BBC TV drama ‘Sense and Sensibility.' The formation on the cliffs in the cove was stunning. Battered by Westerly gales from the Atlantic Ocean the black rocks on the cliffs looked like teeth on a saw.

A view I was privileged to see.

Friday 23rd May - Sadly we made our way home after a wonderful holiday. A lunch stop was made at Evesham Country Park and then home in time for tea. By a coincidence the mileage to and from Barnstaple was the same, 254 miles, despite having to make a detour on our homeward journey.