According to Dickinson’s Antiquities of Southwell, 1301, Vol.1, the Pocklingtons can trace their ancestors to a William de Pocklington married to Elizabeth, in the reign of Henry 111. The Winthorpe Pocklingtons were members of a very wealthy family whose main mansion was at Barrow, near Keswick and they had a manor at North Muskham and Bathley. Roger’s father was William, who had married Elizabeth Rastall, daughter of the Rector of Winthorpe. Their older son and heir was Joseph and they also had a daughter Mary. Roger, the second son married Mary Roe of Sudbrooke, Lincs. 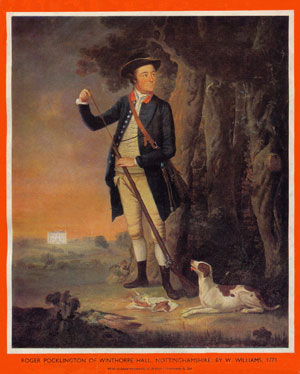 In 1765 he purchased the partly built Winthorpe Hall and completed the main building, outbuildings and layout of the grounds, Under Roger Winthorpe Hall and its residents seemed very prosperous. His first child Roger was born in 1775 and a daughter Elizabeth were born the following year. In 1779 the church tower fell and Roger had it rebuilt. An inscribed stone says, “This steeple was rebuilt in 1779. The first stone was laid on the 15th. day of April by Roger Pocklington junior, of this parish aged 3 years 3 months and 5 days.”

On an oval tablet over the front door of “Lowood,”(home of Mr. and Mrs. Packe) is a tablet which reads, “The first stone of this house was laid by Roger Pocklington junior and his sister Elizabeth, June 25th. 1787 aged 11 years and 10 years.” The house was built as a farmhouse. From 1775-1809 Roger’s name appears in the Brewer’s Charity Records and he obviously took an active interest in the work of this charity.

In 1778 the common lands in the Rundles, Winthorpe Lake and Trent-side fields, and in the Carrs and Pastures, (the present aerodrome), were enclosed under the award of the Commissioners and many exchanges of land and property took place. Roger Pocklington greatly improved and enlarged the Hall estate, being very generous in his exchanges. The actual Hall and grounds extended from the bottom of the hill, near the present bypass, down to Holme Lane and on the North side all the land to the Trent bank. When his son, Roger married, he built The Grove. His wife Jane had two sons and two daughters. Everything seemed to flourish until 1803. Roger senior was partnered with William Dickenson and William Hunter in a bank at Newark (now Lloyds of Castlegate) and they with Samuel Haynes in a bank at Retford. These four men became indebted to their London Bankers, who demanded security for £120,000. On May 3rd. 1803 Roger Pocklington had to make over to Trustees all his estate including the Winthorpe property to be sold on behalf of the London bank, should his bank not recover. They apparently struggled on for six years, but on July 4th. 1809, the doors were closed and Pocklington, 75 years old was a ruined man.

His wife, Mary had died the previous year and Roger died on October 12th. 1810. Roger junior moved to Leamington Spa and was buried beside his parents in 1847. Their remains are in the vault under the present church and a Pocklington memorial is behind the organ.

The Pocklington Brothers and their buildings in Volume 4.

Sketch by Joseph Pocklington in Volume 4.